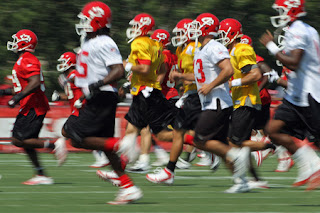 The Chiefs’ 2012 training camp is approaching, which means that a new NFL season is just around the corner. The team’s camp will be presented by Heartland Health at Missouri Western State University located in St. Joseph, MO and will begin tomorrow. The camp will run through Aug. 16, with outdoor practices open to the public (indoor practices due to inclement weather will not be open to the public). A full list of the team’s training camp schedule can be found here.

The Chiefs will host a night practice at Spratt Stadium on Tuesday, July 31 at 7:15 p.m. The Chiefs annual Family Fun Day presented by American Family Insurance will be held on Saturday, Aug. 4 at 1:30 p.m. at Spratt Stadium. Missouri Western will charge a $5 admission fee with no charge for children ages three and under.

This will be a critical camp for the team, as the Chiefs are installing a completely new offense under new offensive coordinator Brian Daboll. Several new starters will also need to be integrated into the system, most center Rodney Hudson and right tackle Eric Winston. While Dwayne Bowe is still absent, last year’s first round pick Jonathan Baldwin will have an opportunity to continue to impress coaches and teammates and acquire a bigger role in the offense.

One of the biggest goals the Chiefs have is to simply get healthy – on offense, Jamaal Charles, Matt Cassel and Tony Moeaki are all returning from season ending injuries. Defensively, Eric Berry is also back, and will try to build on the promise he showed during a pro-bowl caliber rookie campaign.

The most interesting position battle may be at quarterback – where newly signed Brady Quinn will battle with 2011 fifth-round pick Ricky Stanzi for the backup spot behind Matt Cassel. Given Cassel’s injury history and his inconsistent play, there is a chance that more than one signal-caller leads the team during the regular season.