One Dead, One Critical in Chubby's Shooting 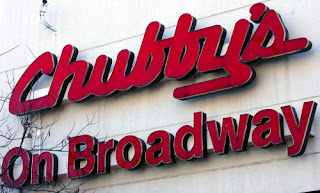 Chubby's on Broadway is an interesting place, especially at 2:30am. Never will you see a more generous assortment of freaks, east of California, congregated in one place. Or at least that's how I remember it when I lived around the corner back in the 90's. I suspect today it's a little more dangerous than it was, you know, with a thuggish element.

Anyway, last night it got real dangerous in the parking lot. Cops were called around 2:30 with reports of gunfire. When they arrived, one man was dead and another man injured. The dead man is described as black and in his 20s. The dead man is also a robbery suspect.

Two black men in a Cadillac (stereotype alert) attempted to rob two white guys (another stereotype alert) in the parking lot of Chubby's. Fortunately (well not if you are the dead man), the alleged victim of the robbery was packin'. Bad guy, DRT, justice served. White guy robbery victim was also shot in the leg and is in critical condition.
at 10:46 AM No comments: