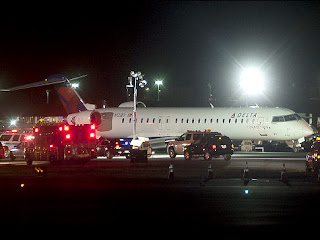 The events leading up to the crash landing were documented by two passengers who recorded footage on their i-phones. In the footage, instructions from the flight attendants to keep the passengers' heads down as well as a "brace for impact" warning. While it is not legal to use a cell phone during a flight, especially during take-off and landing, the captured video was a great move by the passengers to not only document the events but receive what will likely be some compensation for their footage.

Many are comparing this landing to that made by Captain Sully of US Airways in the Hudson river. It will be interesting to see if Captain Jack Conroyd receives the same amount of praise and media attention as Sully did after the Hudson incident. Considering that Conroyd landed the plane with no working landing gear on the right side is pretty remarkable, but even more remarkable is the fact that no one on board was hurt. Hopefully the passengers who recorded the landing video will buy Conroyd a gift with the fat checks they receive from CNN and other news outlets.