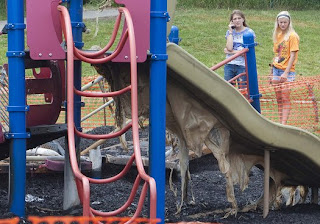 Over the last week, three fires have been set at Elementary School playgrounds in the Blue Valley School District. Police say the fires are suspicious and connected (no shit).

The first fire was at Cedar Hills Elementary on west 165th St in Overland Park. It occurred around 10 PM last Friday. Later that evening a fire occurred nearby at Morse Elementary - 152nd and Monrovia at around 1:30 AM. The third fire was reported at Liberty View Elementary on Tuesday night around 1 AM. This fire was also near the others just into Olathe.

The Liberty View fire damage estimate is $75,000, basically a total loss for the play structures. An estimate has not been given on the other two fires, but 80% of the playgrounds are consumed likely leading to the entire structure being replaced. At a time with when budgets are tight, I sure hope they catch the (probably kids) that are guilty of this. Assholes.
at 10:39 AM No comments: