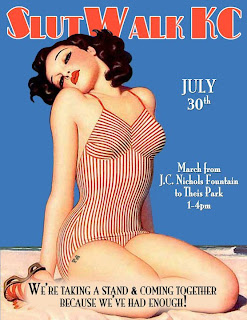 I have mixed feelings about Kansas City's version of the Slutwalk. I am a huge fan of sluts, and who isn't really, so I should be ecstatic about hundreds (or, dare to dream, thousands) of sluts congregated in one place. And part of me is, after all, participants are encouraged to dress as slutty as they want and there is sure to be photos aplenty taken for Internet distribution. It is also for a good cause. The purpose is to raise awareness about rape victims, and stop blaming those who are raped. It's also irritated the Westboro Baptist Church to the point that they will be picketing. God hates sluts, I suppose.

Where the problem lies for me is the organizers. What a bunch of whiny, feminist, communist crybabies, and a Cornhusker Fan -which is probably the worst of all. A lot of the women participating in the Slutwalk will probably be lesbians and, or hairy arm pitted Berkenstock wearers. We'll just have to wait and see what kind of turnout we get.
at 10:48 AM No comments: