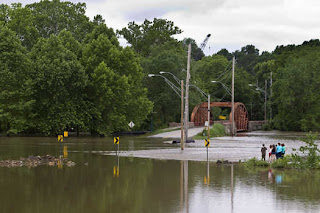 Kansas City area homes and business continue to be damaged by on-going flooding. Up to four feet of water has been reported in some areas, as heavy overnight rains have pushed creeks and rivers out of their banks and into business and residential areas.

The National Weather Service has reported that areas near the state line between Kansas and Missouri have been hit the hardest. Leawood, Mission Hills, Prairie Village all were victims to the most significant flooding that came primarily from Indian Creek.
Many homes and businesses have experience power loss as well. The combined effects of the water damage and loss of power have caused some businesses to permanently close, while many residents have been forced to relocate.
Several major highways in Kansas and Missouri have had closings as well, which has caused traffic problems for other highways. While many of these issues are being resolved, the forecast for rain throughout the month of June could signal more problems in the future.
at 12:12 PM No comments: