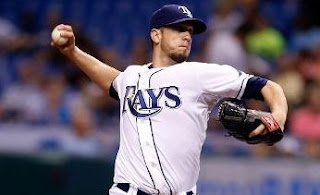 After the Chiefs once again failed to put a competitive product on the field, Kansas City sports fans have turned their attention to the Royals, who have just pulled off a blockbuster trade. The team dealt outfielder Wil Myers (recently named the 2012 minor league player of the year), pitchers Jake Odorizzi and Mike Montgomery and third baseman Patrick Leonard to the Rays for pitchers James Shields and Wade Davis.

The Royals’ main goal this offseason was to improve its pitching rotation, and apart from Zach Grienke, Shields was the most sought-after available pitcher. Shields was an All-Star last season and finished third in the Cy Young voting two seasons ago, and the pitcher compiled an 87-73 record in his seven seasons with the Rays. Davis may also have a shot to join the Royals’ rotation, although he spent much of last season as a reliever. Davis finished with a 3-0 record last season with a 2.43 ERA in 70 1/3 innings. As a starter the previous two seasons, Davis went a combined 23-20 with a 4.27 ERA.

While acquiring Shields immediately makes the Royals contenders for the AL Central, the big question is did the team give up too much? Myers is predicted to become a star, as he posted monster numbers in the minor leagues and is only 21-years-old. By dealing Myers, the team is also now stuck with Jeff Francoeur in the outfield yet again this season, and the veteran has been in a sharp decline over the past year. Odorizzi was also a very valuable prospect, as the pitcher went 11-3 with a 2.93 ERA in Class AAA Omaha last season and was predicted to compete for a rotation spot as early as this season. Myers and Odorizzi were a huge part of the organization’s future, and the Royals made have dealt a future star and quality starter for a good-but-not-great pitcher.

There is no question that this trade makes the Royals a contender for the AL Central. The team has a deep and talented pitching staff, and if its young stars on offense can continue to produce, the team should push for a playoff spot next season. Despite the immediate upgrade, it appears that the team has mortgaged its long-term future for a shot to win now. If the team pushes for a playoff spot this season, trading Myers and Odorizzi will be more justified. The Royals, for the first time in years, are officially in “win now” territory.