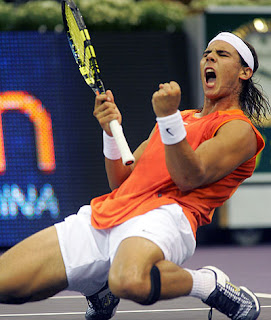 With the United States eliminated from the World Cup and baseball’s postseason months away, sports enthusiasts can turn to Wimbledon to help fill the void between the end of basketball season and the start of football. The tournament is historically filled with drama and high-profile matchups, and this year’s edition is no different.

Rafael Nadal once again upended Andy Murray, who has been on a quest to be the first British Champion at Wimbledon in 74 years. Similar to their meeting two years ago, Nadal dismantled the young Scot in strait sets to earn a place in the final. After their soccer team’s quick exit in the round of 16, the entire United Kingdom, including the queen, has waited to see if Murray can break through.

Nadal’s opponent in the final will be 12th seeded Tomas Berdych, who will be a large underdog against the world number one. Berdych reached the finals by upsetting Roger Federer and Novak Djokovic, and the Czech player will have to muster out one final upset to win his first grand slam title.

With the frustration over officiating and blown calls in the world cup, Wimbledon offers top international competition without the human error and controversy. Hopefully the world cup will embrace goal-line technology, similar to what Tennis does with line calls, to avoid further blown calls.