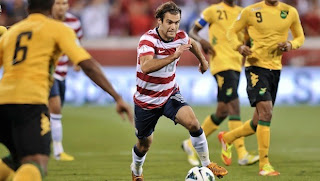 The United States Men’s National team has a big game tonight against Guatemala, the semi-final round of 2014 FIFA World Cup Qualifying. The match will take place at Kansas City’s LIVESTRONG Sporting Park, and will begin at 6 p.m.

The United States needs a win or a tie to advance to the finals. The Americans can also advance with a loss in the game based on the result of the Jamaica vs. Antigua and Barbuda match, but the US squad has made it known it intends to go for the win. USA found itself in this game after winning a critical World Cup qualifying match against Antigua and Barbuda 2-1, with both goals being scored by national team veteran Eddie Johnson.

LIVESTRONG has turned into one of the best venues to watch soccer in the nation, and Kansas City has slowly grown an impressive soccer fan base. A lot of the credit has to go to the success of Sporting Kansas City, which has become one of the best teams in major league soccer and is fueled by a terrific home crowd whenever it plays in KC.

With the Royals stuck in two decades of futility and the Chiefs looking like the worst team in the NFL this season (not to mention they haven’t won a playoff game since January of 1994) Kansas City fans should be grateful that they have Sporting KC and LIVESTRONG park. Our MLS team has given the city a winner to root for, and helps attract marquee matchups like tonight’s world cup qualifier featuring our national team.

Is Kansas City turning into a soccer town? If the Royals and Chiefs keep underperforming, it is entirely possible.