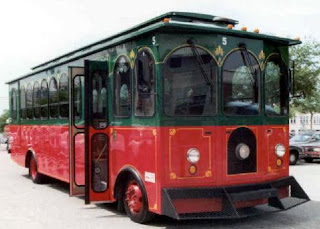 By March of 2010, there should be a trolley system that runs between the River Market and Waldo. Seed money worth $200,000 was approved to be given by the City Council to the Westport Regional Business League for this purpose. An estimated cost of $15 will allow customers to ride the trolley's between the hours of 7:00 P.M. and 3:30 A.M. The purpose is to provide safe transportation and attract people to the city's nightlife.

The current proposed route will stop at 8 different areas known for their restaurants, shopping, and nightlife. Initially, the trolley's will only run at night. The trolley's will make stops at the City Market, the Power and Light District, the 18th and Vine area, Martini Corner (31st and Gillham), Westport, the Plaza, Brookside, and Waldo. If the execution is successful, there are hopes for plans to expand the trail to Zona Rosa in the Northland and I-435/State Line in the South.

Let me spell this out. Yes. It is great that we are getting some drunks from behind the wheel. However, it is only for a brief period. This may actually make it more dangerous as people feel the comfort of taking a trolley between bars. Guess what, they still have to drive home. Despite the push, our downtown areas aren't exactly filling up with tenants. Many people still live outside the city and still have to get home at the end of the night. It isn't going to be on a trolley.

To be even more honest, there are actually cabs you can grab around the downtown area and get in between areas for less than $10 bucks. Granted, you have to put up collateral to get home at the end of the night if you live more than a mile away. At least it can be done. If you want to get home from the Zona Rosa area at the end of the night, you better start walking because you can't even get a cab up there, and thus are forced to drive.

In conclusion, I absolutely love the idea of public transit between the cities popular spots for nightlife. However, this is putting a band-aid on a bullet wound. It's small time and a reflection of how this city operates...2nd rate. Great ideas. Poor execution. Keep it up and see what happens.
at 12:28 PM 2 comments: