Michael Vick Gets Shot at Redemption 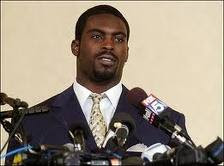 Few professional athletes, or human beings for that matter, fell harder than Michael Vick did two years ago. Vick, a former number one pick, had enjoyed three pro bowls and had led his Atlanta Falcons to an NFC Title game and what seemed to be a bright future.
Then it happened. Vick, found guilty of soliciting illegal dog fighting at his home, went to jail, and his career was seemingly over. A quarterback who once signed the richest deal in NFL history was seemingly finished, another cautionary tale of an athlete who had everything, and foolishly squandered it all away.
Sports can be funny though. For every nine athletes that go to jail and are never heard from again, there is always that one who makes a comeback. Vick signed with the Eagles to be a decoy type player. Maybe run a little wildcat, line up in the slot. No one thought he would ever be a starting quarterback again.
Fast forward to this season. The Eagles deal long-time starter Donovan McNabb to Washington, Kevin Kolb suffered a concussion and Vick found himself leading a gusty comeback attempt against Green Bay, in which he moved the chains all day with his arm and legs and nearly pulled off the comeback. Vick may never be a long-term starter again, but starting this week, he has a chance at some redemption and an opportunity to prove a nation wrong.
at 6:18 AM No comments:

Michael Vick signs with The Eagles

Michael Vick signed a 2-year deal with The Philadelphia Eagles just minutes ago. The 2 year deal with Vick will cost the Eagles 1.6 million dollars for the first year and then there's an "option" for the Eagles to keep him on a second year for an additional 5.2 million.

The "option" in the contract must be a safety net for the Eagles due to Vick's ghetto-like idiotic behavior off the field. "You can take the boy out the ghetto, but you can't take the ghetto out the boy", that's what the Eagles are thinking.

Vick will enter the Eagles roster as their back up quarterback behind the aging, playoff / superbowl-choking Donovan McNabb, and followed up on the roster for now with A.J. Feeley and Kevin Kolb. I would have to guess that the Eagles will release either Feeley or Kolb sometime within the next three weeks.

This is the second of two great off-season moves that the Eagles have made, the first of which was the signing of Missouri Tigers star wide receiver Jeremy Maclin.

Vick will not be eligible to play in regular season games until his official suspension from the league is lifted. Commissioner Goodell has stated that Vick would be fully reinstated by week 6 of the regular season.

Michael Vick was the number 1 draft pick of 2001, and at one time the highest paid player in the NFL until he was convicted of conspiracy and running a dog fighting operation in 2007. He has been in a Federal Penitentiary right here in Leavenworth, Kansas ever since.
at 9:15 PM No comments: