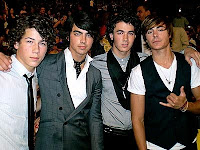 Most believe that the announcement that The Jonas Brothers World Tour being canceled is just a rumor, and we do too.  There isn't any info on the Jonas Brothers website about the cancellation, and who can trust the accuracy of Tweets.  But if it is true we will be the first to let you know.

In other Jonas Brothers news the group's show "Jonas" has been approved for a 2nd season on Disney.  They will begin shooting in February of 2011 after their world tour, supposing that the tour hasn't really been cancelled!