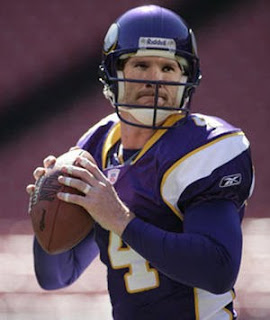 Brett Favre finally announced that he will be returning to the Minnesota Vikings this season, after flip-flopping back and forth numerous times as to whether or not he would rejoin the team. Favre's announcement may be surprising to some, considering just two weeks ago he announced he would not return, after saying he was unsure the majority of the summer.
While Favre is one of the greatest quarterbacks to play the game, the drama over his announcements is getting old. Favre's reputation has gone from one of the toughest and grittiest quarterbacks in the league to a spoiled, me-first prima donna.
Then again, can we really blame Favre for taking time to make an important decision. Perhaps his ankle really did need to get cleared, and it is possible he really does struggle with deciding to come back or not. Mostly, ESPN and other sports media outlets are to blame for the circus that surrounds Favre every year. ESPN even had camera crews stalking the quarterback to and from the airport. Favre's penchant for drama doesn't help, but the reason we get sick of Favre reports every year are mostly due to ESPN and other sports outlets shoving the coverage down our throats.
Comments?
at 6:02 PM