Flight Attendant Hero For us All 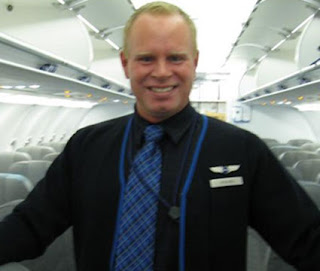 Many people are stuck in a boring, mundane job or forced to deal daily with an annoying boss or coworkers. While these disgruntled workers grind out day after day, dreaming of just leaving and telling their coworkers how they really feel, one man summonded up the courage to do what we all dreamed of. To top it off, he did it on an airplane.
By now, many people have heard the story of disgruntled Jet Blue flight attendant Steve Slater, who became so fed up with his job after dealing with an irate passenger that he grabbed a beer, deployed the plane's emergency shoot and left the aircraft after it had landed. The actions made Slater an icon, and I'm sure we will see him on talkshows and news outlets across the country for months to come.
Slater's actions were extreme, and he will face some criminal charges. However, the message that he sent to his employers is one we can all relate to. I'm not advocating those that are fed up with their jobs simply quit, especially in the manor Slater did. Taking a little action to change our lives is what I got from Slater bailing out of a plane with a beer in hand, and that is something we could all use.
Comments?
at 12:04 PM