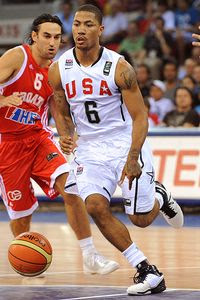 Team USA appears to be looking to send a message to the world that its poor showing in the last World Basketball Championship was a fluke. The Americans crushed Slovenia, 99-77 today to jump out to a 2-0 start. Team USA, which many have deemed the American "B" team due to its lack of high-profile stars such as Kobe Bryant or Lebron James, has looked impressive after appearing to be uninspired in its last WBC outing.
Now at 2-0 following big wins over Slovenia and Croatia, Team USA is looking to do something it hasn't achieved since 1994: win the World Championship. To do so, it will rely on young players that were absent from the United States' gold medal winning squad of 2008. After poor showings in 2002 and 2006, many pundits wrote off this team due to its lack of marquee players and the overall youth. Despite the low expectations, the Americans have looked dominant so far, with Kevin Durant appearing unstoppable at times.
What makes this year's team have a shot at the title is a new attitude. Young, hungry players are exactly what the national team needed for a rejuvenation. Many NBA stars look at the WBC as a secondary event compared to the NBA and the Olympics, and this attitude showed in 2006 when many players seemed disinterested and lethargic on the court. By fielding a team of young, hungry players eager to prove their skill to the world and other NBA players, this team will have a chance to win the WBC and earn an automatic berth into the next summer olympics.
Comments?
at 3:00 PM