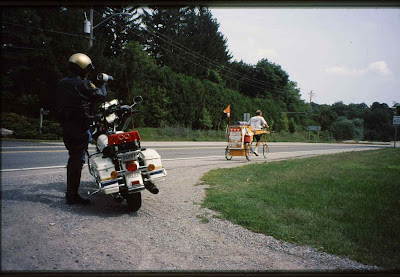 Anyone who regularly visits the Ameristar Casino in Kansas City knows that you do not speed through the tiny village of Randolph, MO on Hwy 210. A speed trap has long existed there and is a huge revenue source for the town of roughly 50 people. It is not uncommon for small towns to derive income this way - obviously lacking a strong tax base for revenue. I used to drive Hwy 50 to Warrensburg regularly and remember a speed trap in Lone Jack. Well, for many years, a law has existed in the State of Missouri that limits a municipality's ability to derive income from speeding tickets. In fact, the law states that any revenue over 35% of a town's budget that comes from ticketing on state or US Highways has to be returned to the Missouri budget for education.

State Auditor Susan Montee recently completed an audit on the town and released her findings. The report finds that Randolph does not have a system in place for tracking funds derived from violations given on highways. In addition, the town operated 5 months starting in August of last year without a court clerk. Many duties were not being done, and records were a disaster. The Police Department also does not keep track of tickets issued. The Department was unable to locate 38% of the tickets tested by the Auditor's office.

Not only is the city of Randolph in violation of state law, the shoddy accounting is also makes them ripe for corruption. The Auditor's office has made no allegations of corruption as yet.