Man Shot and Killed by Store Clerk in Kansas City 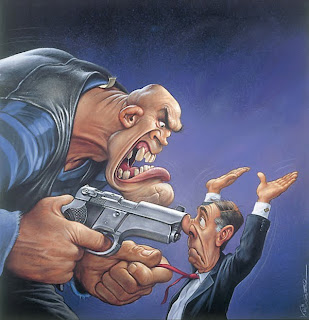 Man Shot and Killed by Store Clerk in Kansas City
For the second time this week, a disturbance at a local Shell Station has lead to gunshots. The gas station and convenience store located at 5501 Bannister Rd in Kansas City was the scene of a fatal shooting last night. Police responded to a disturbance call at the location that was quickly upgraded to a shooting around 7PM on Friday. A witness described the victim as "acting crazy", throwing things and generally tearing the place up before the clerk took action. The clerk reportedly tasered the man before shooting him. Police arrived to find the man bleeding just outside the door of the store. He later died at the hospital.
Early Wednesday morning, cops were called to the same station. Two armed men tried to hold up the store. A clerk (we don't know if it was the same one involved in last nights incident), pulled a gun from his waistband and fired several shots. The would be robbers fled and have not been arrested. One of the men may have been shot.
I think the message has been sent to would be robbers and other dirt bags. Do not pull any shenanigans at the Shell Station at 5501 Bannister Rd. They are packin' and not afraid to spray a little lead. One more piece of trash cleaned off the street.
at 8:01 AM

The man you called a piece of trash was certainly not without problems but I knew him and he was a good kid at heart. He was loved by alot of people. He was young and hopeful and there is a lot of bad people out there that are a danger to society. This young man was unarmed and not dagerous to anyone, just a little messed up. He certainly didn't deserve to be shot, certainly in the back. So you might want to know a little more about the people you call trash. He would of helped you do anything if you would of ask him too. You know nothing about him and yet you lump an unarmed murdered young man that had a family that loved him and many friends. How dare you judge him like this when you know nothing about him. Shame on you! What are you? God?

Look, I didn't know him, but the world is sick and tired of people acting stupid. Who knew he was unarmed? This same store - possibly the same clerk - was held up at GUNPOINT a few nights earlier. So maybe he wasn't trash, but he sure as hell did something stupid, and sometimes stupid actions get you killed. These kids have got to learn that actions have consequences. There are always two sides to every story.

If you're gonna be a freak, join the circus - that's what I did! I work for Obama.