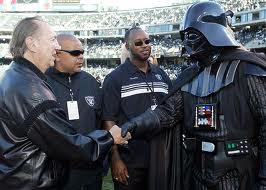 It can be debated who had a worse performance on Sunday in Oakland - the Refs or the football teams. Just your typical Raiders-Chiefs contest featuring 27 penalties, 2 fake punts, 6 fumbles, numerous terrible calls (for both sides) - a 4th down that was really a 1st down, and a kickoff return for a touchdown, oh yeah, and Overtime. The Raiders defeated the Chiefs by the score of 23-20 in a game that it seemed no one wanted to win. The Chiefs got off to a 10-0 First half lead that probably should have been a lot more as the Raiders made mistake after mistake that the Chiefs refused to take advantage of. A late second quarter field goal was nullified by a holding penalty on the Chiefs, and when the Raiders gave the ball right back after a terribly thrown pass was intercepted by Jon Mcgraw, the Chiefs failed once again to take advantage. The second half started with a Raiders kickoff return for a TD, and when the Chiefs coughed up the ensuing kickoff, it looked bad for our boys in red. Though the Chiefs righted the ship eventually in the second half to once again take the lead, they let the Raiders tie it up, and eventually win it in overtime.

My thoughts on the game:
-Cassel again was inaccurate most of the afternoon.
-Why can't our guy hit on the long ball? Every other quarterback in the league can throw a long ball with better accuracy than Matt Cassel. If he can't execute, stop calling the plays.
-The Chiefs defense did a nice job again, McFadden only had one long run and was contained well most of the day. Take out the KO Return TD and the Raiders only scored 16 on our D.
-I guess Charles was nicked up a little, but he needs to see more carries, he averaged 5yds/Carry to Jones's less than 2.
-This wasn't the disciplined Chiefs team that we have seen this year, but I guess playing the Raiders, a little of that is going to rub off.
-The Refereeing this year has been hideous - particularly Pass Interference calls, and can we at least get the down right? Is that too much to ask?

All is not lost for the Chiefs, they still have the lead in the AFC West, and a very winnable game coming in Denver. With all the parity in the NFL, it should be a fun ride.

Speaking of quarterbacks that can't throw the long ball, Missouri's Blaine Gabbert had a terrible night in Lubbock on Saturday going just 12 for 30 and only 95 yards. After the Tigers broke two long runs for touchdowns in the first quarter, they inexplicably stopped running and started throwing. Gabbert couldn't hit anybody and Missouri's defense wore down in the second half. The Texas Tech Red Raiders shut down Mizzou on route to a 24-17 victory effectively ending Missouri's chances for a Big 12 North title.

KU rattled off 35 unanswered 4th quarter points to stun the Colorado Buffaloes in Lawrence on Saturday afternoon. It was the biggest comeback in Jayhawk history in a game that almost no one saw. Announced attendance was over 40,000, but from highlights I've seen that is a generous estimate and there was no TV coverage. The Jayhawks have been up and mostly down for the year,but they have shown signs of life lately. Of course Colorado is terrible (winless in the Big 12 this year), so who knows.
at 11:18 AM