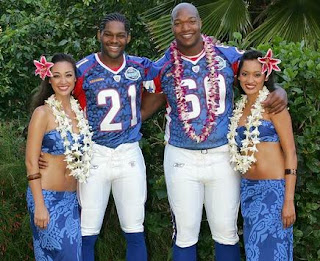 This year's Pro Bowl featured a lot of big plays, absolutely no defense and a funny ending. However, the NFL's All-Star game continues to be completely and utterly pointless, and the combination of poor football and a meaningless game turn this football fan away. However, year after year the Pro Bowl's ratings are strong, and this year's game had the highest ratings ever.
The Pro Bowl lacks some the elements that make football great: huge hits, an every-game-matters scenario and, above all else, defense. On most snaps you'll see defenders standing around and doing a whole lot of nothing, as the game resembles more of a summer seven-on-seven drill. Unlike the MLB, NHL and NBA, the NFL's All-Star game takes place after the season has ended. An injury or bad play will most likely not result in a player missing any future game time, why not go all out?
MLB has the best All-Star game, because there is a good rivalry between the AL and NL and the game actually means something (the winner gets home field advantage in the World Series). While this scenario isn't applicable to the NFL since the Superbowl is held at a neutral location, it would be nice if the NFL could find a way to make the game mean something to the players. Award money to the winner, or a car, anything to make players want to actually win the game and take pride in their performance.
The Pro Bowl will continue to remain popular due to the NFL's large fan base and because it is the second to last football game of the year. While the game is fun now, imagine the league's best players going all out on every play, giving a playoff-type effort. Until this happens, I will pass on watching the league's best defenders work on their tan.
at 6:03 PM

Good write up - the Pro Bowl is definitely a joke to the NFL fans. The main thing is I suppose is it's more of a "right of passage" for the players and I'm sure that they have some really meaningful get togethers and such while on vacation in Hawaii. There are probably a lot of awards dinners and meetings, etc. that the public doesn't know about and they are important to the players.

I'm with you though, I don't watch the stupid thing either.