Wife Shoots Husband in the Groin 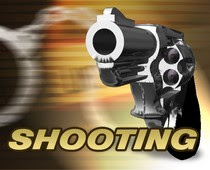 A Kansas City man is recovering today after an altercation with his wife last night. Around 10PM last night, Kansas City Police were called to a residence at 1130 E 76th Terr for a domestic dispute with gunshots fired. When they arrived a 50 year old man with a gunshot wound was getting ready to drive himself to the hospital. He had a gunshot wound to his groin.

The man stated that he was showing his wife how to use the safety on the gun when is fired accidentally. Neighbors, however, told Police that they heard the couple arguing and the wife yelled "Give me my card or I will shoot you" - moments later they heard the gunshot and called Police. Next time the bitch asks for her card, give it to her, she obviously ain't playin. The wife was arrested on suspicion of aggravated assault.
at 3:42 PM