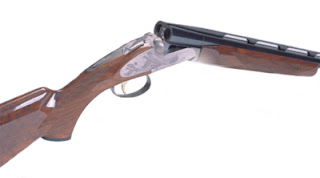 The Scott County (in Southeast Missouri) Sheriff's office received a call around 11:30 PM Saturday night from the McDonalds in Benton, MO. It seems a man in the drive-thru was not going to take no for an answer. The restaurant was closed, but 27 year old Chris Heuring (good lookin' feller), from rural Benton was sent by his pregnant wife to get some McDonalds Hamburgers. Apparently he was told in no uncertain terms that he was not to return home without said burgers.

Mr Heuring pulled his shotgun on the McDonalds employee upon being told the store was closed. He told the worker that his 6 month pregnant wife was going to kill him if he came home empty handed. A Deputy was only a minute away when workers called 911 - he held the suspect at gunpoint until the Sheriff's arrival. They took Mr Heuring into custody without incident. He is being charged with Unlawful Use of a Weapon and DWI.

Now I can relate to this poor man's plight. I have a pregnant wife at home as well, and you had better damn well get her some food when she wants it. Unfortunately for Mr Heuring there is probably a lack of 24 hour joints in the small town of Benton, MO.
at 2:11 PM