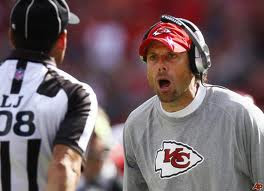 Most of us knew it wouldn't be pretty - One could hope, but the Chiefs never really stood a chance on Sunday. Our team simply is not as good as the Ravens, or about half of the NFL. The signs were there even before kickoff when they picked up Kevin Curtis early in the week (he was thrown to more than Dwayne Bowe). This is a receiver who was out of football and being treated for cancer just a couple of months ago. Curtis had one catch for 3 yards - one catch and 3 yards more than Pro-Bowler Dwayne Bowe. The passing game was dreadful with Cassel throwing 3 INTs, and only completing 9 passes. Throw in 2 fumbles (one by Charles, and one by McCluster) and that spells disaster.

The Running game, while effective, was given up on in the second half. Maybe Charles was a little banged-up, but whatever the reason the Chiefs were pass heavy, and that led to their quick 3rd Quarter demise.

The Defense, while good at times especially against the run, couldn't get off the field on 3rd Downs. The Ravens were 9 of 17 on third downs, and 1/1 on 4th with numerous 3rd and Long conversions. Word is Todd Heap just caught another pass over the middle an hour ago - seriously, we don't have anyone that can cover a Tight End?.

The off season will be interesting. Obviously we need a top shelf receiver, and I'm excited to see who we can get - dare I dream about a Haley-Larry Fitzgerald reunion? Who will be our Offensive Coordinator? Also help is needed at Linebacker and Offensive Line. Keep your head up Chiefs fans, we definitely improved over last year, and hopefully will again next year.
at 10:45 AM

Thanks for doing this write up Mr. W - I know it wasn't easy. Good things for next season maybe :)

Hey at least they improved, besides I always have the Royals to look forward to!