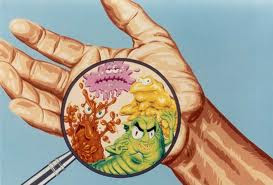 There seems to be a flu-like illness making its way through the Chiefs locker room. Wide Receiver Dwayne Bowe missed practice on Wednesday due to an illness (he was back on Thursday), and Guard Brian Waters missed practice Wednesday and Thursday (no word on availability for the game Sunday). This has the Chiefs coaching staff worried. A hand washing mini-seminar was given to the players this week. Soap and warm water, at least two minutes - "Kindergarten Rules" as Coach Todd Haley put it. Let's hope the new training keeps the Chiefs players healthy for the big Playoff game with Baltimore on Sunday - we need all the help we can get.

In other Chiefs news, Wide Receiver Kevin Curtis was signed by the team as a little help for a struggling Receiving corps. The Chiefs have had problems all season at receiver - after Bowe, the depth chart drops off considerably with a has been and a couple of never will Be's. Curtis had a great 2007 season with the Eagles, but has been plagued by injuries ever since - including a bout with Testicular cancer in 2010. Could be a long term solution at Receiver if he can return to his past abilities.
at 11:08 AM

I think that the whole CITY needs a hand washing seminar.

Good luck to the team. I hope everyone is doing better by now. And one more thing, never forget what they learned from the hand washing seminar. Kindergarten rules!

Keeping hands clean through improved hand hygiene is one of the most important steps we can take to avoid getting sick and spreading germs to others. Many diseases and conditions are spread by not washing hands with soap.