Silas Dent (1876-1952) was known as the "Happy Hermit of Cabbage Key".  Choosing to live alone on the island of Cabbage Key, now a flourishing upscale tourist area known as Tierra Verde, Silas Dent was known as one of the most rugged survivors of all time.  His family moved to southern Florida in 1900 to settle down and raise a dairy farm.  When the farm failed Silas' family returned to the cities and villages of the Florida keys, but not Silas.  Silas decided that he would rather go at it alone on a then deserted island known as Cabbage Key. 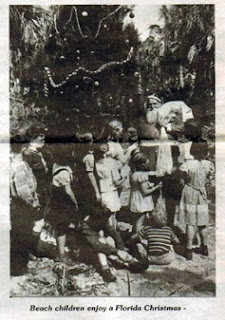 Silas was a farmer, a fisherman, a hunter/gatherer, and most surprisingly - Santa Claus.  Every Christmas Eve, Silas would row his boat from his island to the mainland to greet the children and give them presents which he saved up all year to purchase on nearly no income whatsoever.  Even in his early years, Silas had a long white beard and his portly figure fit the part of Santa to a tee.  The local children were very aware of his presence and would flock to him when he arrived, back full of presents and all.  This was the one time of year that Silas would mingle with his surrounding residents.  Once Christmas was over, Silas would return to his small grass hut on Cabbage Island to resume his life alone without the modern advantages of running water, electricity, or even batteries.  Silas built his grass hut out of palm leaves and palm logs.  He often wore no shoes and his feet were so tough that he used to fish for stone crabs by sticking his big toe into their dangerous lairs, waiting for them to latch on. 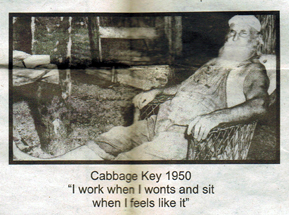 My favorite Silas Dent saying is "I work when I wonts and sit when I feels like it".  Reminds me of the reason that I started my own business back in 1996.  I've never looked back since, and I work when I wonts and I sit when I feels like it.  The story of Silas Dent came to me recently when we were vacationing at St. Pete Beach.  We were fortunate enough to be "stranded" there when the storm blasted through Kansas City last week.  The St. Pete Beach area is a tropical paradise in the form of a long thin strip of land that sits along the Gulf.  The stretch of island is filled with beach bars, 5 star resorts, and some GREAT restaurants - most importantly all in walking distance along the beach.

One of the restaurants that we came accross was Silas Dent's Steakhouse.   From the minute we walked in we knew we were in for something special.  The host announced to the server that we were to get the "best booth in the house" - and that we did.  The booth was the coolest booth in history. To get to it, you had to climb up several stairs, then you would find the booth in it's own little room overlooking the bay (pictured left).  I started noticing pictures hung about of this strange man with a long white beard - strumming a banjo in many of them - seated in front of the ocean.  We asked about this man and the owner of the restaurant chain himself came over and gave us the full story.  Born and raised in the Florida Keys, the owner had been one of the children that used to wait for Silas Dent to come on Christmas Eve to deliver presents back in the 40's.  He fondly remembers meeting Silas and he decided to build a VERY successful chain of restaurants bearing Silas' name.  I didn't get a photo of it, but there's a picture in the men's room of Silas with his back turned to you, looking at you over his shoulder, overalls half way down, taking a piss on the beach.  I loved this place. 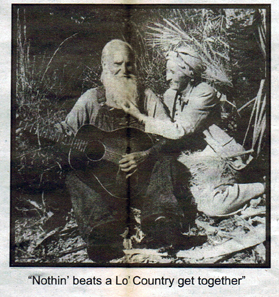 Silas Dent continued to live on the island until, at his neice's insistance, moved to the city.  On his first night at his Neice's apartment, Silas slipped and fell in the shower and fractured 5 ribs.  The very next day Silas promptly moved back to his island claiming "Civilization's too dangerous for me..."  Silas lived out his years on Cabbage Key island and fished and hunted his way to a generous 76 years old.

Next time you go to St. Pete Beach you've got to take a picture of Silas Dent pissing on the beach and post it here.

Idiot. Silas Dent is dead now. Did you even READ the article?

Back in the early 80's I would go to Silas Dent's to just listen to the bands or singers of Buffet type songs. This was before the Bar/eatry/dive/hangout spot moved to its current location. I have been hooked on Silas since. He has quite the historic person that flavored Pass-a-grille. A time when you could just sit back and enjoy life. I only wish I could have met him in that day. As a Child my Grandfather took me fishing at a pier on pass-a-grille every Sat. The Last one just before the point on the east side. It is no Longer there it was taken out in the late 60's by a no name storm. I just missed him by one decade. Thank You for the pictues and info. Bobby