Chad Ochocinco to Try Out for Sporting KC 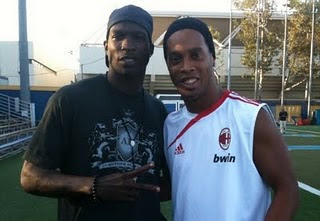 In an odd bit of news today, Peter Vermes (Sporting KC's Head Coach) announced the Chad Ochocinco of NFL Wide Receiver Fame has been given a tryout with the Kansas City Soccer Club. He will be on 4 day trial starting next Tuesday. Chad has always had an interest in Soccer from age 4, he says. The NFL lockout will give him the opportunity to pursue a "lifelong dream to play Major League Soccer".

Chad is obviously a world class athlete who could probably excel in a number of sports and this seems to be a serious tryout, though one could have doubts with Ochocinco's past antics. He certainly will be missing the attention if the NFL season is indeed canceled for the upcoming year.

In other soccer news, tickets went on sale today for the upcoming Men's National Soccer team Gold Cup game against Guadeloupe. This game will be played at Sporting KC's new stadium, LIVESTRONG Park. The US game will be preceded by Canada vs Panama.
at 2:52 PM

So did he make the team or what?