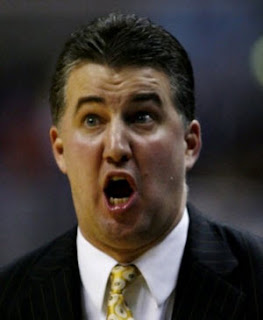 It has now been made official that Purdue coach Matt Painter is meeting with Missouri's athletic department to discuss the open mens' basketball coach vacancy. Painter was expected to have met with Missouri officials sometime yesterday in Florida, where his family is currently on vacation.

In response to this news, Purdue is now issuing statements that they will do everything in their power to keep Painter. One would think it wouldn't be that hard. Painter is from Indiana, played at Purdue under legendary coach Gene Keady, and is already in his dream job. Why exactly would he want to leave?

The simple answer is money. Painter feels like he isn't being given enough for his services as well as the necessary resources to hire good assistants. Painter currently makes about 1.3 million a year in base salary, and Missouri is thought to be offering a seven year deal worth $14 million.

Overall, this feels like a reach on Mizzou's part. Most insiders expect Painter to stay if Purdue's counter offer is good enough, and I would agree. Painter is likely using Missouri to get a better offer from Purdue, and so far it appears this is working. Credit Missouri Athletic Director Mike Alden for going after the best possible candidate (and trying to avoid another Quin Snyder hire), but it appears Painter might be too hard to get.