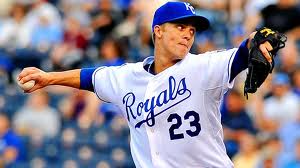 Zack Greinke's new team, The Milwaukee Brewers, will not receive his services for at least the first part of April.  Somewhat of  a "poetic justice" situation for Kansas City fans, it wouldn't have bothered me if he was out for the season.  As it stands, the Brewers have reported that Greinke fractured his rib while playing in a pick-up basketball game.  While it is in Zack's contract that he cannot participate in professional basketball, it doesn't say anything about staying of the playground courts.

Ironically enough, Greinke had recently stopped former MLB player Aaron Boone in a New York hotel and asked him about his career ending injury that Aaron sustained during a pick-up basketball game.  Boone recounts "I don't know if he was looking for advice or what, but he told me he played basketball quite a bit, and how much he enjoyed it. He asked me what I thought. I don't remember if I said, 'Play, or don't play.' But when I read how he got hurt, I said, "Whoa!'"

Zack "Donald" Greinke will begin the 2011 season on the disabled list and will not start the home opener as planned.

Bio Info:
Donald Zackary Greinke ("Zack") was born in Orlando, Florida on October 21, 1983. Selected from Apopka high school in the first round of the 2002 player draft, Greinke was named Gatorade National Player of the Year that same season. Greinke entered the major league on May 22, 2004, playing in the same game that saw the retirement of Reggie Jackson's number.

Greinke's performance has seen its ups and downs largely due to his battles with depression and anxiety. In 2004, he ended the season with 8 wins and 11 losses and an earned run average (ERA) of 3.97. His 2005 season was not as successful (5-17, ERA of 5.80), and in February of 2006 he left the Kansas City Royals spring training camp because of depression and anxiety.


Greinke spent some time away from baseball, eventually returning to sign a one-year contract with the Kansas City Royals in 2007. In 2008 he had a good year, posting 13 wins and 10 losses and an ERA of 3.47. In January 2009, after winning the Cy Young Award, Greinke signed a 4-year contract with the Kansas City Royals worth $38 million, and pitched 24 consecutive innings without giving up a run.
at 5:35 PM