Parents of Baby Whose Fingers Were Eaten by Ferret Arrested 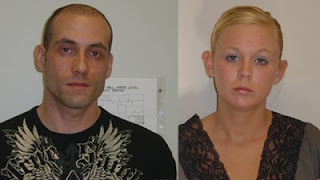 Back in January, we told you the terrible story of the baby in Grain Valley that had 7 fingers eaten off by a ferret while the parents supposedly slept nearby. Well, turns out the two WERE NOT EVEN HOME at the time of the attack. That's right, they left their 4 month old baby home alone. Nice. Cell phone records obtained by Grain Valley Police showed the two exchanging text messages and were not in the vicinity of their Gran Valley home.

Ryan and Carrie Waldo will not be in the running for parents of the year this year because they are in jail to answer 1st degree child endangerment charges, a class C Felony. Bond has been set at $10,000. More charges could be added as court documents allege the couple tampered with evidence (they cleaned the baby swing and moved furniture) - Not to mention lying to police.

What a couple of white trash losers. Of course, as soon as I knew they owned a ferret, I could have told you they were white trash. If you own a ferret, you are white trash, no exceptions! My guess is the kid didn't stand much of a chance in life with these parents even if he had all ten fingers. Poor kid. The baby and an older sibling have been removed from the home pending the outcome of this case. If they're lucky, mom and dad will have to do several years and they can get some real parents. Fuck, this pisses me off!
at 12:05 PM

wow, way to take a sad event and use it to insult an entire group of people based on their choice of pet. I don't own ferrets, but I don't think that qualifies an individual as white trash. I do think shamelessly making ignorant generalized insults on the back of such a tragic story is definitely an earmark of white trash though.

Wow, such a heart felt comment, you are a genius, no doubt about it. Thank you for sharing your amazing gift of observation with all of us. Douche.

Ferrets suck and so do pittbulls...if you defend this you own one and your house is covered in poop

I have a ferret and a doberman they are both gentle, it's people who suck! And you up there... white trash? White trash is an ignorant rambling fool blaming animals and circumstances between the animal and child instead of these two dirt bags who left their child home alone. PERIOD If they left their baby unattended at home, do you really think they fed their pets?! It takes a very starved ferret to chomp on human flesh of any age. Very very sad for the child, tragic he will now live life as he will, but neither his or the ferrets fault. I don't need to post anonymously.