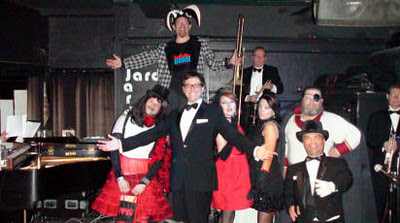 A complex situation, no doubt. But it reminds me of an old saying. "In America, ownership of property is seen as a license to destroy it." Or...as was just observed over my shoulder..."Firing the entire staff with no warning, certainly SOUNDS like someone with the people skills of an IT specialist".

Cocaine is a hell of a drug.

Wonder if it will be up for sale. This place cannot close. When I read this, it felt like someone told me a close friend died.

Her name isn't Johnson, she's not from Pune, she's not an IT specialist. She's a drunk coke head who's been screwing everyone she comes in contact with for years

"Jazz musicians are mostly loners, who are fairly arrogant and only want their own name to be known, this is why they don't really put together bands, rather they "sit in" with each other - or jazz performers with some notoriety put together a random group of jazz musicians to "back" their performances, often introducing each musician several times during a performance."

This is remarkably ignorant. You don't know what you're talking about.

Wow, whoever wrote this is obviously not a musician. Jazz musicians are more communal than most other musicians. We are more concerned about sharing our musical experiences with each other as well as with the audience.

As far as Jardine's, I hope someone who truely cares about KC's jazz heritage buys it and keeps it alive.

This is just not true, jazz musicians may be chummy amongst themselves, but they are definitely NOT team players. Every man for himself in the Jazz world, that's why they all go by their name instead of a band name.

Jardine's is a wonderful venue with a top notch staff. I've spent Valentine's there more than once as well as many other romantic evenings. I was engaged there with the Dave Stephen's Band collaborating with my fiance, now husband! I've always enjoyed the staff and the exceptional cuisine by Jim! Singing with Dave or his band has become something I look forward to when he's in town... what a wonderful friend, talent and talents with which he works! I am hoping and praying this situation gets turned around! And fast!

Perhaps I need to rephrase my earlier statement. Most "musicians" are communal by nature. There are jazz snobs who only play certain genres, but there are also musicians who only play blues, rock, country, etc. While jazz is not as commercially successful, it is an American art form and part of this city's history. Plus, as a jazz musician ,(who also plays blues, funk, country, classical or whatever I am hired to play or write, jazz is definitely a style that takes some skill to play.

Shit, most musicians I know aren't "communal" at all, unless you're from the 60's or something - most musicians are all about "where's my solo?" and "where's MY check?" and "that guy shouldn't be making more than me"

Ah, who cares, the music business is a wash today anyway. All of the good music has been done already, everything now is just imitating, copying or straight up stealing from real songs that have already been written. As for playing in Kansas City, musicians are treated like ass, pretty much like bus boys. And can you say "expendable"? Most musicians who keep at it in Kansas City are either doing it to escape, drinking like fish at every show (ahem, bands that play at the Levee or anywhere east of Kansas City in the shitty classic rock scene), or of course there's the type that still thinks that they're going to "make it" and the perform for pure ego (ahem, Drew 6, Ida McBeth, Angela Hagenbach), then there's of course the bright eyed, bushy tailed 20 something new musicians who stay out all night and party with the club staff, score with a bunch of women and drink booze and do whatever else, and this brings me to Jardine's. I know that the rumors are circulating around that the owner was a heavy cocaine and alcohol user but here's the thing: I don't think that she was doing those thing ALONE - I'm pretty sure that after the doors closed for the night the staff and musicians got in on that action. I know this may have sounded negative, and I wish that it wasn't true, but there are the facts, jack.

Where is all this slamming and speculation come from? I think it's obvious the owner has her demons to deal with, but I don't know why everything from IT techs to India to jazz musicians, are all being attacked as a result of one night club closing.

First, I don't know that the owner was an IT person at all. I believe she actually went to school to be a doctor. I do believe this might be one of the other things they do in Inda outside of IT (seriously, how bigoted can you be?).

Regarding musicians, the idea that jazz musicians are any different from any other performer, is simply moronic. Let's face it, any person who performs to groups of adoring people who constantly shower them with praise, will have an out of control ego. In addition to having adoring fans however, performers also have jealous wanna-be's, who randomly attack them in blogs.

As far as jazz outside of Jardines go, you can probably see the same musicians perform at places like the Phoenix, the Blue Room, the Oak Room, the lower level of Plaza III, The Drum Room, etc. etc. One can argue whether these places provide pure jazz music, but I would challenge that Jardines music wasn't pure jazz either.

Perhaps while Jardines is closed, KC folks will start to recognize some of the other venues in town that aren't as cramped,loud and grimey. Jardine's outlived it's reputation a long time ago. I just hope the other "jazz" venues come to realize that the two things Jardines had going for it was that it stayed open longer than most clubs in KC and the live music was available every night of the week.