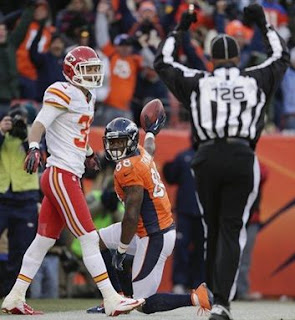 The Chiefs’ regular season came to a sad and predictable end on Sunday, as the team was absolutely destroyed by the Denver Broncos, 38-3. There was some silver lining to the train wreck - the loss guaranteed that the Chiefs will have the first overall pick in the 2013 NFL draft.

While it is expected that head coach Romeo Crennel will be fired sometime today, the status of General Manager Scott Pioli is still up in the air. Some reports have Pioli being canned, while recent reports are surfacing that the maligned GM will get to keep his job. While we don’t know who will be making the pick in the draft, the Chiefs’ position on top of the board is secure.

After the Chiefs determine who will be making the pick, the team will have to take a long, hard look at the quarterback position. Many feel that the team should finally draft and develop a top-pick quarterback, and the team may very likely grab Matt Barkley with the top pick. If the team does take a QB number one, it is imperative that the team find a good quarterbacks coach and offensive coordinator that will help with development.

It is also possible that the Chiefs do not feel like Barkley or Geno Smith are worth the top overall pick, and the team could address the QB position by signing a veteran. Several veteran quarterbacks with starting experience will be available this offseason, and the team could trade for or sign a veteran and try to find a QB later in the draft or in the future. If the Chiefs do go this route, they could draft an impact player on the offensive or defensive line.

This was an extremely difficult year for Chiefs fans, due to both the team’s terrible on-field performance and off-the-field tragedies. Hopefully with the top pick in next year’s draft, Kansas City fans can regain some optimism about the team and its future.