The Kansas Jayhawks’ regular season ended in disastrous fashion, as the team was blown out by Baylor 81-58. Despite suffering its worst loss in seven years, Kansas was able to win a ninth consecutive Big 12 championship due to Kansas State’s loss to Oklahoma State earlier in the day. 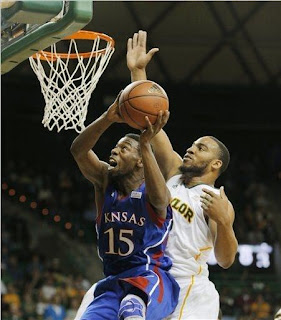 Baylor easily played its best game of the season against Kansas, and was carried by two insane performances from Pierre Jackson and Cory Jefferson. Jackson scored 28 points with 10 assists, while Jefferson added 25 points. Jefferson, who had never hit a three pointer in his career, went three-for-three from behind the arc on Saturday, which puts the Bears’ performance into perspective.


Kansas not only struggled defensively, but the Jayhawks never got anything going on offense. Ben McLemore had a strong game, but Elijah Johnson struggled, shooting 3 of 13 from the field and adding only two assists next to three turnovers. Apart from McLemore, the lone bright spot for the Jayhawks was freshman Perry Ellis, who added 12 points.


Before Saturday, the Jayhawks had looked like the best team in college basketball recently. Kansas had won seven in a row, including a home blowout of K-State and two tough road wins against Oklahoma State and Iowa State. The Jayhawks still have the talent to go deep in the NCAA tournament, but they will have to get better play from Johnson. When the senior point guard plays well, Kansas is nearly unbeatable. Johnson played very well in last year’s NCAA tournament, which was a big reason why the Jayhawks advanced all the way to the national title game.


Up next for Kansas is the Big 12 tournament, where the Jayhawks will once again have the top seed. Kansas will face the West Virginia-Texas Tech winner on Thursday. If the Jayhawks defeat the Mountaineers or Red Raiders, they will face either Oklahoma or Iowa State.