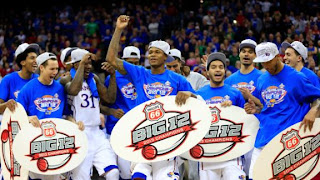 The third meeting this season between the two rivals got off to a slow start, as both teams struggled offensively in the first half. KU was able to build a 24-16 halftime lead, however K-State cut the lead to three early in the second half. The Jayhawks answered with a 12-3 run, essentially putting the game away midway through the second half.


Jeff Withey led Kansas with 17 points and 9 rebounds, and the Jayhawks continued to get strong play from freshman Perry Ellis, who chipped in 12 points. Kansas State star Rodney McGruder scored 18 points, however much of that came when KU had built its insurmountable lead in the second half.


After winning the Big 12 tournament in dominating fashion, Kansas was rewarded with the second overall seed in the NCAA Tournament. The Jayhawks will face Western Kentucky Friday night in the Sprint Center in Kansas City. If Kansas advances, it will play the winner of North Carolina and Villanova on Sunday. The Jayhawks were given a tough bracket, as Georgetown, Florida and Michigan are also in the South region.