After a tough battle with Bruce Chen, Luis Mendoza has been named the fifth starter in the Kansas City Royals’ starting rotation. Chen will be moved to the bullpen. 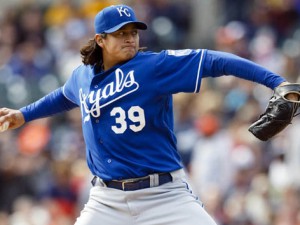 Mendoza had an impressive spring for Kansas City, allowing only one run in 11 innings pitched. Chen struggled in spring ball, giving up 13 runs and 16 hits in 13 and 2/3 innings. Mendoza also had an impressive showing in the World Baseball Classic for his native Mexico. As a result, Mendoza will be joining James Shields, Ervin Santana, Jeremy Guthrie and Wade Davis in the Royals’ starting rotation.


Chen could be a valuable asset to what is already a strong bullpen, and the veteran provides Kansas City with some nice insurance should one of the starters get hurt or struggle. Chen has won 35 games over the past three seasons and has been very reliable for the organization.


The Royals will have to make several other roster decisions in the near future. The team must decide between Brett Hayes and George Kottaras in the battle for the backup catcher position, and between Miguel Tejada and Irving Falu for the utility infielder spot. Kansas City will also have to settle on its bullpen, where pitchers such as J.C. Gutierrez, Francisley Bueno, Louis Coleman, Dan Wheeler and Donnie Joseph are all competing.