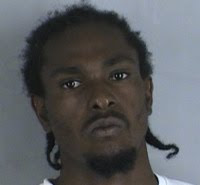 Jackson County Prosecuter Jim Kanatzer charged a clerk, Tuesday, in the shooting death of Frederick C Jones, Jr (pictured at right). Akbar Rana, of Olathe, was charged with Voluntary Manslaughter and Armed Criminal Action. His is not yet in custoday, and there has been some talk that he may have left the country. You might recall the incident on September 3rd at the Shell Station on Bannister Rd in South Kansas City. From the details I can gather, Mr Jones caused a disruption in the store and was involved in an altercation with employees. He was removed from the store and tasered by a clerk, then apparently as he was fleeing the scene, another employee shot Jones in the back. Jones reportedly (it has been confirmed by his family) suffered from mental illness and alcohol abuse. This is surely a sad story.

True, there is not the funding for mental illness that would be ideal. Mr Jones is someone that it sounds like fell through the cracks - we do not put the mentally ill in institutions as we once did, and we are better as a society for it. There are no easy answers, and this clerk (if he is still in the country) will certainly have to answer for his actions.

But, let's put ourselves in the clerk's shoes for just a moment. Just a few nights earlier, the vary same store was robbed at gunpoint - have you ever had a gun shoved in your face? Might make you a little jumpy next time you have an altercation with someone. Now, I'm not justifying what the clerk did if the facts are indeed what we have been hearing, as Alvin Brooks said, it sends a message to the public that you must be careful when you have access to and use guns. I contend there is another message, you also must be careful how you act in another person's place of business and in public in general - you never know how they will react, or perceive your actions. Voluntary Manslaughter seems the reasonable charge given the facts we know.
at 9:49 AM No comments: