Danny Duffy Out For Season With Torn Elbow Ligament 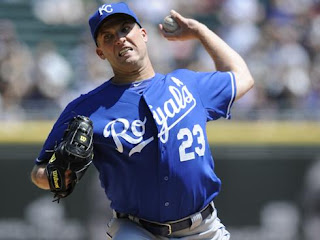 Danny Duffy only lasted 13 pitches into Kansas City's 9-1 victory over the Chicago White Sox before disaster struck for the young pitcher. Duffy tore his left ulnar collateral ligament, and will likely require Tommy John's surgery. This would mean that the young lefty's 2012 season would be over, delivering a crushing blow to the Royals' starting rotation.


Kansas City already lost All-Star closer Joakim Soria to a similar injury on April 3, and now the Royals have lost two of their best arms. Duffy had a 2-2 record this season with a 3.90 ERA, and seemed to be on the verge of becoming one of the better starters in the American League.

The Royals also lost starter Jonathan Sanchez, who was placed on the 15 day disabled list last Wednesday with bicep tendinitis.