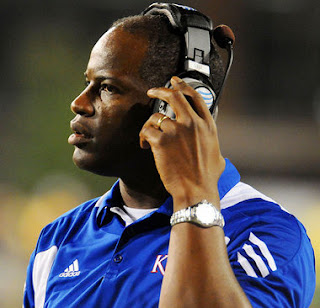 Losing isn't what this is all about, its the nature of the loses and the direction of the program. KU Football is in a state of emergency and is close to destroying everything Mark Mangino built. Only 31 games ago, KU was winning the Orange Bowl. Now KU isn't just losing games, it is getting blown out. Instead of fixing the problems on the field, Gill is focused on implementing rediculous rules to "build character" in his players. I'm not ready to throw in the towel yet, but KU is on the verge of hiring a new athletic director. Gill better improve quickly, or his days are numbered.
at 11:43 AM 2 comments: