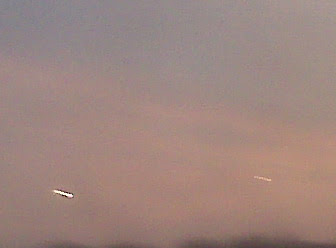 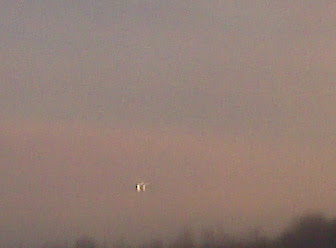 February, 2012 - Two separate reports of UFO sightings in Kansas City came in to us over the weekend. These reports were extremely unique as both reports came in around the same time and were reported within 1 square mile of each other. This time, the visitors were flying over the vicinity of Shawnee, Kansas, one spotted from a home near Shawnee Mission Medical Center, and another from a man playing golf at the Milburn Golf and Country Club.

UFO Sighting #1
This report came in at about 4:45pm on Friday night from a married couple who were working in their back yard in the vicinity of Old 56 Highway in Shawnee, Kansas, near the Shawnee Mission Medical Center. They reported sighting a fairly large craft approaching from the West. The craft was silver / blue in color and had three round lights on the front of it. Then, about 200 yards behind the first craft, another, smaller craft was spotted, following - or possibly "escorting" the larger craft. The second, smaller craft was a blueish silver in color as well and had what appeared to be lights all around the outer ring of the cylindrical vehicle. The smaller craft stayed exactly the same distance behind the large craft the entire time they were flying. The UFOs continued their path until suddenly making a sharp, 90 degree turn in mid air and flew due South at extreme speeds (approx 500 mph according to the witness) until they were out of sight. As the craft were approaching, before they flew away, the husband grabbed his cell phone and snapped the photos that we posted here. It was nearly dark outside so the photos are not clear, but you can see enough to know that these are no ordinary aircraft vehicles. The couple stayed outside for about another hour, watching the sky for a possible return, but no more UFOs were spotted.

UFO Sighting #2
This sighting came in around 4:50pm from a man who was finishing up a chilly round of golf at The Milburn Golf Course and Country Club just a few blocks from the sighting from the couple above. This man was walking up the 18th hole fairway towards his ball when he heard a strange "whirring" sound, "like a giant humming bird" as he described it. He looked up and saw a quickly approaching pair of strange aircraft that he described as silver in color, one vehicle was larger than the other and flew in front, the smaller craft flying in a sort of formation behind the large craft. This matched the other couple's sighting to a tee (pun slightly intended).

We have had reports come in of UFO sightings before that were in the same general area and around the same time from multiple people, but NEVER have we had two sightings that were this close to each other. I mean we're talking BLOCKS away from each other, and within about 5 minutes. These UFO sightings were significant as well because one man was quick enough to grab his cell phone and snap a photo. Here at Kansas City News, we foretold at the end of last fall that more and more UFO sightings were going to be captured due to the fact that everyone now has a camera on their cell phone, in their pocket, ready to snap a quick photo. The only drawback at this point is the quality of the photos from most cell phones are crappy at best. But we're sure that very soon, as the quality of cell phone photos gets better and better, we will be seeing a lot more photos of UFO sightings in Kansas City and around the world.

Keep your cell phones handy, and keep watching the skies! Send us any UFO sightings you have to us at kansascitynews@gmail.com

You do not have to sign up to comment! If you have any trouble publishing your comment, try hitting the "Preview" button to publish from there. Thanks you from Kansas City News!
at 9:26 PM 2 comments: 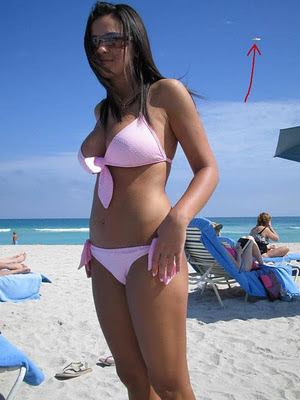 We appreciate all of your emails and if you have a UFO sighting to report in the Kansas City area please email us at kansascitynews@gmail.com and thank you!
at 7:10 PM 2 comments: 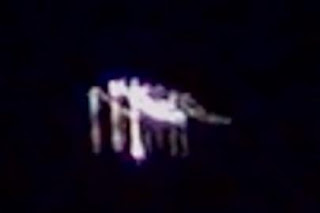 Kansas City News has been following up on the latest UFO sightings in Lee's Summit and Kansas City over the past week. The photo at the left is the only one that has been sent in so far but we should have more UFO photos soon. For 5 consecutive days / nights now, hundreds of people in Lee's Summit and Kansas City have reported UFO sightings. They describe the sightings as UFOs ranging from orange orbs to odd looking formations, and objects with white and green lights all flying around 3000-5000 feet in the air. The sightings seem to be occurring around dusk and early night - from around 5pm to 9pm for the most part. We just had another call come in as we were working on this of a UFO sighting in Raytown where they were able to capture the footage below:

The footage clearly shows a UFO hovering in place above the street, and it is right on par with the other recent sightings in Raytown and Lee's Summit in that the UFOs are flying right over major highways and streets. One account on Wednesday reported a large triangle shaped UFO that flew along highway 50 (Lee's Summit) and then darted away at a speed of approximately 300 miles per hour, then came to a complete and sudden stop over what looked like downtown Lee's Summit, Missouri. The UFO was described as having white, green and blue lights on the bottom of it and the lights seemed to be flashing in a pattern. The same witness also noted that there were at least 2 helicopters in the immediate area at the same time.

Another recent sighting in Lee's Summit occurred tonight at around 7:15pm. The couple was heading down 470 Highway and spotted something that looked like a military formation, but they quickly they realized that these aircraft weren't like any military craft that they had seen before. The UFO sighting was a formation of 6 craft that were flying due North at around 300-400 mph and they did not stop or perform any maneuvers and they flew quickly out of sight. Hundreds of UFO sightings in Kansas City and Lee's Summit are happening this week, I wonder what is going on?

Here at Kansas City News, we will keep watching the sky and keep you posted!

If you have any Kansas City UFO sighting reports please email them to us at kansascitynews@gmail.com
at 7:09 PM No comments:

As a firm non-believer in UFOs for most of my adult life, I have recently watched a few great documentaries that have tipped the scales in the other direction.  UFO sitings were always a topic reserved for science fiction geeks and the like, but since the general public now has more access to video and photo equipment in an "on the spot" format (cell phones, etc.) the UFO sitings have been pouring in as of late.

If you haven't seen it already, and you have NetFlix (which is an AWESOME program by the way), then you should definitely check out Dan Aykroyd's documentary on UFOs and how the world will soon be forced to publicly release information about UFOs in order to further our education on this topic...if nothing else, for our own safety.  According to Aykroyd in this documentary, it is only a matter of time before a UFO appears at a large enough gathering of people (rock concert, sporting event, etc) that will witness a UFO sighting together and validate this phenomenon.  The Mexican government released some pretty good videos of a UFO sighting in 2005, and to make the UFO case even stronger many former US astronauts have come forward with UFO encounters that they had while traveling in outer space on various voyages and missions.  Several credited and famous astronauts (among them Gordon Cooper) have claimed that UFOs have "followed" their missions in outer space and an increasing amount of video footage has come out recently proving their statements.  Gordon Cooper claims that a group of UFOs in "military formation" followed one of his flight missions, flying directly next to Cooper's plane and even "immitating" his movements - and then showing off with some of their own moves.  Many believe that the US Government designed the B-52 Stealth Bomber based on their study of documented UFO photos and possibly even recovered wreckage.

Most UFO researchers believe that the US Government has definite proof of the existence of UFOs and possibly even recovered UFO wreckage in storage, hidden from the general public.  I have to believe that these claims are true, and with everyone in the US walking around with video and photo recording devices such as cell phones I believe that UFOs will become a future topic of discussion, at the least.
at 11:42 PM 25 comments: