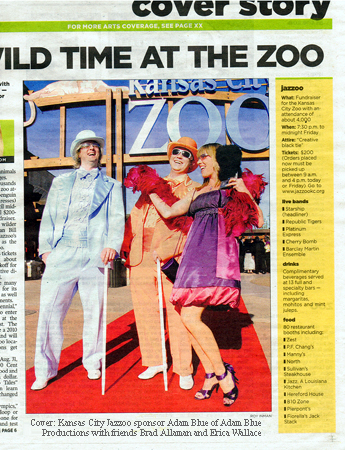 
We are very lucky here in Kansas City to have such a beautiful array of charity events, fundraisers and galas.

Jazzoo Photos (upper right) and Fundraiser Info
As many as 4500 patrons attended the 2014 Jazzoo charity event in Kansas City and the event likely raised as much as $750,000 or more as last year they raised about $800,000 for the lovely animals in the Kansas City Zoo. This year's Jazzoo event was geared toward paying for the new "extreme makeover" of the tiger dwelling. The event was a huge success and the weather cooperated perfectly making it a magical evening for all. Over 65 Kansas City restaurants participated and they had 10 custom bars set up at random locations at the Zoo so everyone (including the animals) were well fed and "watered". Jazzoo featured the talents of Dr. Zhivegas from St. Louis produced by Adam Blue Productions.  Info will be available soon from the FOTZ on tickets, entertainment, restaurant participation, donation opportunities and more information for Jazzoo.

The Dream Factory Annual Gala - Kansas City Charity Event
This year's Gala at Starlight Theatre will feature a casual cocktail hour, followed by a delectable sit down dinner that will feature a film showing all of the dreams that came true in for the children. The dinner will be followed by our famous live auction and a guest appearance by KMBC-TV's Larry Moore. The delightful evening will be topped off with entertainment straight from Los Angeles, California in the form of The Dave Stephens Swing Orchestra. by Kansas City News 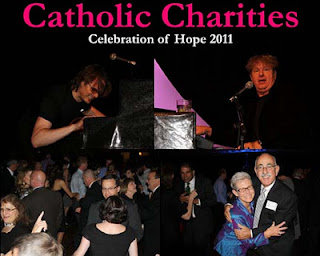 Catholic Charities "A Celebration of Hope" - Kansas City Charity Event
The Celebration of Hope Gala featured a delicious dinner, incredible works of art including pieces by Kansas City artist Bill Drummond, who's artwork was displayed throughout the ballroom and foyer. After dinner, the charity event and auction raised in the neighborhood of $200,000 towards the charity which helps the community in numerous ways (see below for more specific information about the Catholic Charities of Kansas City). The evening was capped off with entertainment from Kansas City's Dueling Piano act Roll Over Beethoven. by Kansas City News

Jazzoo - Kansas City Charity Event
Jazzoo 2011 once again featured a wide array of Kansas City cuisine, represented by over 50 Kansas City restaurants including The Oak Room Intercontinental, The Skies Restaurant, and one of our favorite plaza fine dining restaurants Fogo De Chao.  It was be a hot one out there but the drink stations kept everyone cooled down.  Dress at Jazzoo is notoriously referred to as Creative Black Tie, where guests improvise on some form of tuxedo or formal wear.  You will definitely see some strange get-ups at Jazzoo, and some of them will probably be us! by Kansas City News

Gillis Spirit Awards - Kansas City Charity Event
As one of Kansas City's oldest charities, Gillis has been in Kansas City since 1870.  Gillis' mission is to help at-risk children and families reach their potential through education, counseling, and social services. The vision of Gillis is that all children and families will live in emotionally stable, safe and nurturing environments.  They will be giving out this year's Spirit Awards at the Sheraton Crown Center (formerly The Hyatt Regency) and will feature cocktails, dinner, the awards ceremony and a performance by The KC All Stars. - Kansas City News

Cerner's First Hand Foundation "Masquerade" at The Midland
Definitely geared toward the young Kansas City hipsters, this upscale event is held at The Midland Theater by AMC and will feature live music by Dr. Zhivegas produced by Adam Blue Productions. Catering will be provided by Hyatt Regency Catering, and there will be an open bar for the entire night from 7pm - 12am and an after party at Windows on Main on the top floor of the Midland Theater.  by Kansas City News

Cystic Fibrosis Foundation's "Gala on the Glen" - Kansas City Charity Event
The Gala on the Glen had a wonderful dinner, followed by entertainment by Kansas City dueling pianos, "The Dueling Piano Guys" , produced by Adam Blue Productions, who had everyone at the event on their feet and singing along.  The Dueling Piano Guys also generated over $1000.00 in tips which they donated to the Cystic Fibrosis Foundation. by Kansas City News

Buck, BBQ and Baseball - MLB 2012 All Star Game Charity Gala
When the 2012 MBL All Star game takes Kansas City by storm this year on July 6th - 10th, there will be a huge Kansas City charity event held at the 18th and Vine district in honor of the Negro League Museum of Baseball, in which camera crews from Major League Baseball will come and shoot to use as filler footage during the Nationally televised All Star Game to show the Kansas City tradition and their part in the formation of the MLB today.  This charity fundraiser will benefit the Negro League Museum and will be held on July 7th, 2012 at 6pm.  Tickets are not yet on sale but we will keep you posted! by Kansas City News

National Health Care for the Homeless Hits Kansas City
The NHCH was in Kansas City on Wednesday night as well, holding a charity gala, produced in part by Adam Blue Productions, at the Sheraton Crown Center (formerly The Hyatt Regency) where they had a beautiful reception, dancing and even a little karaoke. - by Kansas City News

Firefighter Gets a New Roof - Kansas City Charity Event
In this Kansas City charity event, Lieutenant Joe Sullivan, a 19-year active firefighter with the Leawood Fire Department, and his family were selected as the winner of the new roof. by Kansas City News

Farm Aid at Livestrong Park - Kansas City Charity Event / Concert
Farm Aid started in 1985, one of several benefit concerts inspired by the epic Live Aid of earlier that year. Willie Nelson, John Mellencamp, and Neil Young started Live Aid and have been going strong ever since. A benefit concert has been held nearly every year since 1985 and the organization has raised more than $39 million according to their website. Farm Aid will be held this year at Kansas City's Livestrong Park. by Kansas City News