Big Win for Mizzou Elevates Them to National Title Picture 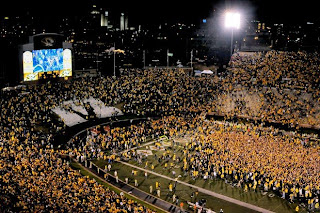 This ain't your daddy's Tigers - or your big brother's for that matter. Saturday night the Missouri Tigers exorcised a few demons at Memorial Stadium in Columbia, beating the Oklahoma Sooners by a score of 36-27. The Sooners had beaten the Tigers 19 of 20 games prior to this years contest. The win takes the Tigers to an impressive 7-0 record and the only unbeaten team in the Big 12. Fans rushed the field to remove the goal posts and take them to Harpo's tavern downtown as is the traditional post-big game victory celebration in Columbia. The Tigers are now 6th in the BCS poll, and one of only 6 undefeated teams remaining in the country.

Missouri had Oklahoma's defense on it's heals all night with a devastating combination of running and passing plays. They rushed for 178 yards - a huge key to victory as pointed out by yours truly earlier in the week. Enough cannot be said for the play of the offensive line, Quarterback Blaine Gabbert had plenty of time to throw, and they opened up huge holes for Missouri's running back by committee. They could by the best unit in college football, plus they have a Tackle named Elvis - that is awesome.

And what about Missouri's Defense? It wasn't quite the dominating performance we have seen from the Tigers D up to this point this season, but they were excellent when it counted. On numerous occasions Oklahoma would drive down the field only to be stymied in the red zone. D-Lineman, and Raytown's own Aldon Smith made a spectacular interception and run back halting one of Oklahoma's First Half drives.

If Mizzou can go on the road and get a win next week in Nebraska, they would be virtually guaranteed a spot in the Big 12 Title game - and win out (dare to dream) and the Tigers should get a shot a National Championship.
at 8:43 AM 1 comment: