ESPN in Columbia for Big Matchup with Sooners 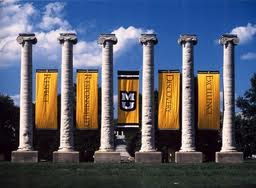 The Missouri Tigers will play their toughest, and most important game of the year tonight in Columbia when they host the Oklahoma Sooners at Faurot Field. Though Missouri could still win the Big 12 North with a loss in this one, to be viewed as an elite team, they must beat the Sooners. Oklahoma has beaten Missouri the last 7 times they have met. Particularly painful was 2007. That year, Mizzou lost only 2 games, both to Oklahoma - the first loss took Missouri out of the National Championship picture (MU was ranked #1 at the time). There is no doubt the Tigers have motivation for this one.

ESPN Game Day has made the trip to Columbia as well. This marks the first trip to Columbia for the Game Day crew (They have been to the site of several Missouri Games, but not in Columbia). This only raises the hype and importance of this game for the Tigers. Lots of national attention can be a great thing if you can pull off a victory, it would be excellent for national reputation.

Blaine Gabbert looked as good as ever last week in College Station, but the Tigers are going to need a running game if they are to hang with the Sooners. You can't expect your defence to win this one for you. Vegas has the Sooners as a 3 point favorite. Missouri CAN win this game, but I think they don't - mostly based on past experience as a Tiger Fan. Until they show me they can beat the Sooners, I am not a believer. Oklahoma 30, Missouri 19
at 7:28 AM