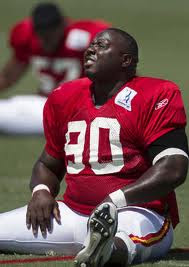 The Chiefs Shaun Smith aka "The Genital Giant" can keep his $10,000 - he has won his appeal with the NFL. Smith was sent a letter from Appeal Officer Art Shell stating that the video could not show conclusively whether Smith grabbed the junk of San Fransisco player Anthony Davis, therefore the fine would be dropped. Smith said he was happy to have this incident behind him, but was still upset that his name was dragged through the mud, he was worried what his kids might think and that they might be teased. Just goes to prove, you didn't do it if you didn't get caught. I'm alright with it as long as the guy is on my team.

Tyson Jackson will be back in the Chiefs lineup this Sunday against Jacksonville, but also in uniform for the Chiefs at D-Line is a fresh face. Atiyyah Ellison was signed this week by the Chiefs. Ellison is a graduate of Missouri, and played last year with the Jaguars. He takes the roster spot of Alex Magee, who was trade to Tampa Bay earlier in the week. Look for Ellison to see limited action with Jackson back in play. 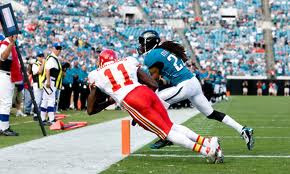 Wide Receiver Chris Chambers will also be back in action for the Chiefs this Sunday. Chambers missed last week's game against the Texans with a finger injury. Terrence Copper was largely ineffective as a replacement for Chambers. Hopefully he can bring some added help to the Chiefs passing game.

The Chiefs take on the Jacksonville Jaguars Sunday at Noon at Arrowhead Stadium in Kansas City. Televised on CBS.
at 12:58 PM