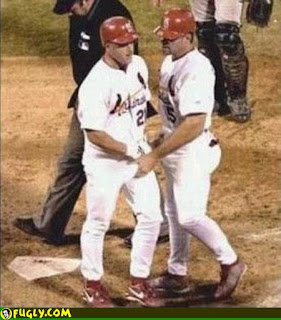 Chiefs Shaun Smith Fined by NFL; Royals on Late Season Tear
In Sports, there is all kinds of touching between men that is inappropriate on the street. Hugging, ass slapping, and apparently crotch grabbing as our friends in the picture have illustrated (maybe that's only OK in St Louis). Chiefs Defensive Lineman Shaun Smith, or as the media is starting to refer to him, "The Genital Giant", has been fined $10,000 by the NFL for what it termed as "Unnecessary Roughness" for the crotch grab on San Francisco Lineman Anthony Davis. This comes after the second complaint by an opponent after as many games. This time the incident was (sort of) caught on camera. Though you really can't see the actually grab, it is obvious he does something very painful to Davis, who retaliated and was penalized 15 yards in the game. Smith said in an interview that he doesn't recall doing anything like that. You would think a guy would remember grabbing another guy's balls, but OK.

How about your Kansas City Royals. They are in the midst of one of their patented end of the season runs that does nothing but provide false hope for next season. They have won four of their last five (against two of the best teams in the League) and taken the Rays out of first in the American League East. Last night, Bruce Chen, pitched his first complete game shutout in a 12-year Major League Career. Chen took his season record to 12-7, the best on the Royals pitching staff. His ERA is 4.17 - the same as Zach Grienke's. Is Bruce Chen our new ace? God it sucks to be a Royals fan.