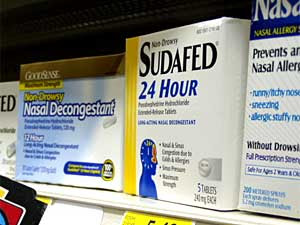 Missouri Governor Jay Nixon and Attorney General Chris Koster want new laws regulating the sale of Over the Counter Cold Medications that contain Psuedoephedrine. The chemical is the single most important substance in the manufacturing of Methamphetamine. Current Federal law requires all medications containing psuedoephedrine be kept behind the Pharmacy counter and a photo ID required for sale. Since these measures have been enacted, the Missouri meth lab count has fallen form a 2003 high of near 3,000, to around 1700. Last September, the State launched a new electronic system to help pharmacies trace those who buy more than the legal limit of the medications - that is not enough, says Nixon.

Well, with government it is never enough. No amount of government intrusion is ever enough. Don't get me wrong, I think keeping the medications behind the counter is a prudent and relatively convenient solution to a problem that does need addressing. Meth is nasty stuff, I've seen what it does to people first hand. Requiring a prescription to obtain cold medications is NOT the answer. As with so many government "solutions", it creates a larger problem that it tries to solve. Going to the doctor is not cheap, and it is prohibitively expensive for some folks. These medications provide cheap, effective relief for cold and allergy sufferers, and many simply would not go to a doctor to get a prescription. Give the new tracking system time to work. With health care costs the way they are now, in "crisis" as Obama likes to say, lets not find ways to drive up costs.
at 10:41 AM No comments: