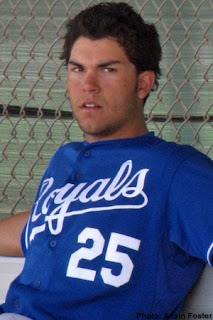 The Royals have gone 14-6 at home this season, and will look to continue its dominance in Kansas City tonight against Oakland. The Royals will face a talented pitcher in Gio Gonzalez, however the A's offense hasn't been anything to write home about this season. I expect Hosmer to give Kansas City a boost, and the Royals should have no trouble at least taking the series from the A's.
at 10:08 AM No comments: