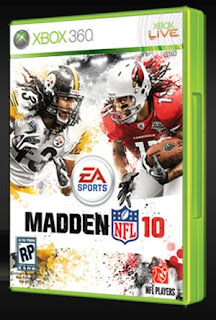 Madden 10 can be a confusing web of madness and any of you who own it know that the book / manual is absolutely no help whatsoever. So here are a few tips:

The Superstar mode in Madden is much easier to play if you create a player in the Madden Creation Zone before starting a new Superstar career. Create your player, choose what team he plays for, adjust the depth chart of the team that your player is on, then save. Then, AFTER you've created your player, start a New Superstar career and choose "start as a rookie" instead of create new superstar. This way you get better stats, and control over the depth chart of your superstar's team, AND you get to choose what team your player plays for. Pretty sweet, huh?

A couple of other facts are that you can play a franchise online but you can't play with a friend on the same team (unless your friend is at your house). Another thing to be prepared for is that online opponents quit in the middle of the game - A LOT. There is an incredible amount of quitting in the world of online Madden 2010.

Another quirk is the general play of Madden 2010, it is extremely hard to pass to the wide outs along the sideline. EA Sports designed this game to favor the Tight End passing game and other inside passing routes. Running is fairly realistic depending on your running back's skills (Adrian Peterson appears to "skate" along almost like magic). Many players who are used to "bombing it out" for quick points will be quite frustrated if they try that on Madden 2010.

Hopefully these tips help, as Madden 2010 is a really great game once you figure out how to play it.
at 12:35 PM