Screech - Dustin Diamond's "Behind the Bell" Book is a Decent Read 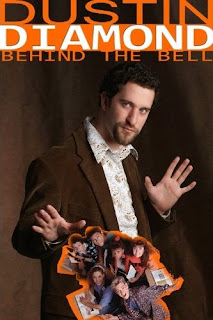 Dustin Diamond's new book "Behind the Bell" - a recount of his memories as a child actor who played the character "Screech" on the legendary Saturday morning TV show "Saved by the Bell" is a very decent read.

During the past year, Dustin Diamond has come under a lot of scrutiny in the press.

Things that WERE Dustin's fault:

Using Saved by the Bell references WAY too much in his stand up routine and other communications to the press. If Dustin truly wants to move forward with his stand up career, he needs to STOP talking about SBTB all together, period. Stop talking about the cast members. Let that shit go son. Dustin is a very talented stand up comedian - he doesn't need to keep bringing up the show. When Dustin released his new book "Behind the Bell" - that was smart - but it was the only time he should have discussed the show or it's cast members.

Things that WERE NOT Dustin's fault:
The main thing that has been out of Dustin's control from the get go is the lack of respect that he has received from his former cast members. The character of "Screech" was by far the best contribution to SBTB, with Dustin Diamond showing a wide array of comedic talent that the other cast members couldn't even touch. Dustin was the youngest cast member and the other cast members were very quick to treat him as such. In the other cast member's defense, however, I must point out that I believe that they would have reconciled with Dustin for the reunion this year had it not been for Dustin's actions and negative comments about Mark-Paul Gosselar, Mario Lopez, Tiffany Thiessen, and the rest of his former cast in the years leading up to the reunion. If Dustin would have put his Saved by the Bell days behind him and focused ONLY on his stand up career, the other cast members would have invited him to the reunion. Dustin if you're reading this - you are an incredibly talented actor and you should not ever mention SBTB in public again...EVER (on your psychiatrist's couch, maybe).

I was extremely disappointed that Mark-Paul Gosselar, Mario Lopez, Tiffany Thiessen, Elizabeth Berkley and Lark Voorhies had the gall to do the Saved by the Bell reunion photo shoot without Dustin Diamond. People magazine jumped TV talk show host Jimmy Fallon's idea of the SBTB reunion and just decided to cut Dustin out. I believe that Jimmy Fallon's reunion would have been much better and I know that he would have never done it without Dustin on board.

"Behind the Bell" - the book

Dustin's accounts of his various childhood experiences make for a very good read. You can tell that the book was not proofread (there's several typos and even a section where an entire paragraph is repeated) - Dustin, did you even read your own book before it hit the shelves? Despite harsh reviews by critics (even before the book came out), this book delivers on every level. Most of the talk before the book's release involved all of the "dirt" Dustin intended to expose about the SBTB cast. I would say that maybe 5% of the book touches on this subject. And that is great because the rest of the book is so much better. I really didn't want to read about what the other cast members were up to anyway, I bought the book to learn about my favorite SBTB character - Screech. Dustin definitely did that - the book has several great stories about his excursions as a child actor both on the stage and off. Diamond takes us through a detailed account of a typical work week on the set of SBTB which is well written and very interesting.

I give this book a B+ and look forward to the next big thing in Dustin's career.
at 4:53 PM