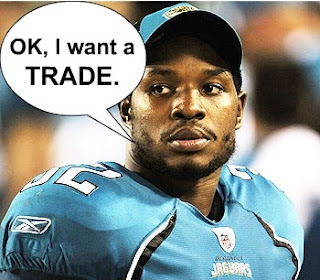 Maurice Jones - WHO?  I remember sitting in my comfy 50 yard line / 15th row seat watching Maurice Jones Drew run up and down the field, mud flying up behind his feet, with little or no resistance in previous bouts with our beloved Chiefs.  Today, however, this was not the case.  Jones-Drew, perhaps the only decent player on the Jaguars, was left in the dust as the Chiefs trounced the feeble Jaguars 42 - 20.  The Jaguars are officially DONE.  Last week's Jaguars game vs. the Titans was the most boring game I've ever watched - I'm pretty sure that the CMSU Mules could have put up a better fight.  The fact that Jacksonville was so weak did not take anything away from the pure galvanization that the road-weary Chiefs fans experienced watching this match.

First and foremost we have to give credit to my personal friend Ryan Lilja and the O-Line for bringing this one home.  The running game was on fire and this opened up the flood gates for an offense that would go on to put up 42 points.  The Chiefs currently lead the NFL in rushing yards.  Jamaal Charles continues to be electric - on a side note, we ran into Charles at the store the other day and the checkout guy tried to enthusiastically strike up a conversation with him - Charles didn't even look at the guy, much less respond to his banter, he silently stared straight ahead.  Just so you guys out there know, if you ever run into Charles in public, don't try to talk to him - he HATES you and all other white people - believe me, we've seen it first hand.  So cheer Charles on from the stands or from your couch, but he does not like you, I promise.

Another great sign for the Chiefs today was the performance of Dwayne Bowe, who's role with the Chiefs was in question after dropping two easy passes in week 4.  Bowe had one of the most amazing RAC touchdown receptions in Chiefs history as he caught the ball, SPLIT two defenders to get into open field and then the coup de gras STUFF of the final nameless defender between Bowe and the end zone. Bowe followed this performance up with another stellar catch where he leapt for the sky in the end zone and managed to tap down both feet for a 2nd TD.

Another well deserved touchdown came to Derrick Johnson when he intercepted ill-adept 5th string QB Todd Bouman for a pivotal game changing TD.  Other notables was the hearty performance of rookie safety Eric Berry, who cost the team with a pass interference play (the one that actually WAS pass interference) but then rallied back to intercept lame duck QB Todd Bouman and put on an entertaining run back show for us.

The Chiefs were the butt of another poor pass interference call today, but thankfully the Jaguars are so lame that they couldn't take advantage.  C'MON REF!
at 5:06 PM