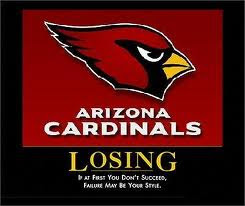 The Chiefs Defeated the Woeful Arizona Cardinals on Sunday Afternoon at Arrowhead by a score of 31-13. But the game wasn't really even that close as the Cardinals scored their lone touchdown on the final play of a game that long been decided. The Chiefs really dominated in all phases of the game which probably says more about the problems Arizona has than how good the Chiefs are - but still it's good to see you win the ones you are supposed to by such a big margin. It was an all around team victory.

I have to tell you I have not been a Matt Cassel fan, but he might be growing on me. He had another efficient game, didn't turn the ball over, and was accurate. Of Course, his receivers were open all day and that really helps. The new, and improved Dwayne Bowe has been terrific, bit I was disappointed to see him break his media silence after the game. The guy is so much better when he keeps his mouth shut and just plays. He set the franchise record for consecutive games with a TD pass on Sunday - his Sixth.

The running game was working, though still curiously Jamaal Charles was absent until the second quarter. In fact, someone I was watching the game with wondered aloud if Charles was hurt because we hadn't seen him. As a team they rushed for 5.5 yards/carry - that is terrific and Charles was over 7 yds/carry-just dominating.

The Chiefs have to show they can do it on the road is they want to win this division. They have a whole game lead, but have to go to San Diego still. Next week's game at Seattle is very important, they are beatable and the Chiefs need to keep their lead in the West.
at 10:44 AM