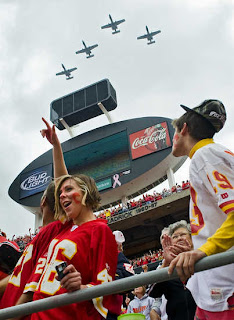 For those who watched the Chiefs smoke the Cardinals Sunday on TV, I just wanted to comment on some of the great things that went on that day at Arrowhead.  The day started off cloudy and breezy in the land of the tailgate.  We were at the infamous North 45 where turkeys were being dropped into deep fryers and champagne drank straight from the bottle.  After a great feast was had by all, we marched into the stadium to find it surprisingly sparse in attendance.  Not sure what the final head count was but there were a LOT of empty seats this day.

Enter Guns and Roses guitarist DJ Ashba and the National Anthem.  Performing a "Jimmie Hendrix" style rendition of the National Anthem, DJ Ashba got Arrowhead rocking early.  Since it was an instrumental number, we weren't sure if the Chiefs fans were going to do it.....but they did....though just a tad early....they did yell "CHIEFS" in place of home of the "brave".

Then, just like magic, the sun blasted out from behind the clouds and the stadium took on a vibrant glow, and almost seemed to match our early noon-time buzz.  The Cardinals effortlessly breezed down the field and cautiously kicked a field goal amidst the swirling winds in the end zone.  But a few punts later, the Chiefs turned on the gas and away they went - and never looked back.

During one of the commercial breaks in the game, the Chiefs honored a returning veteran in the audience and the crowd absolutely erupted.  We tried to research his name but couldn't find it - if someone knows who this soldier was please leave a comment for us.
at 6:50 PM