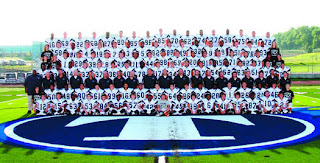 Lee's Summit West High School Defeated defending Champs Webster Groves High School in the Missouri 5A Football Championship game Friday at the Edward Jones Dome in St Louis. The final was 44-21. The victory gives Lees Summit West their first state title since 2007. The Titans finished the season 14-1, with their only loss coming at the hands of class 6A powerhouse Blue Springs South way back in September. It was Webster Groves first loss of the season.

Junior Quarterback Luke Knott threw for 4 Touchdown passes including a dynamite effort by senior Running Back Darnay Session on a 65 yard catch and run screen pass in the first half. It went downhill for Webster Groves from there as Lee's Summit West rolled to a 24-7 halftime lead. Congratulations to the Titans on their 2010 Football State Championship!

Another area team won a state title on Friday as Richmond took the 3A title from John Burroughs High School. The win capped off an undefeated season for the Spartans. Rockhurst High School plays for the 6A Championship this afternoon in St Louis against Hazelwood Central in what should be a great game between two undefeated powerhouses. That game will be televised locally on Metrosports at 6:30PM.
at 7:20 AM